I’d like to think that though she likes the princess thing that maybe she doesn’t buy into the whole someday my prince will come thing. Self saving princesses… handsome but idiot princes, like in this awesome Sesame Street episode.

Sometime around the second year of the Professor’s life I thought that maybe, just maybe it might be fun to have two kids.  What was I thinking???

A friend of mine’s husband works counseling children for a living.  He is quick to point out that only children are the ones who are the most messed up.  My apologies to only children out there that read my blog-if you’re reading my blog then you are just fine.  A little warped but just fine.  😉

So we decided to have a second child.  Once again on the first try we got it.  Looking at this track record it’s probably a REALLY good thing I’m on birth control.  My husband must have sniper sperm.

This one was a girl.  I should have realized something was different, because I was sick from the moment of conception on.  Days of contractions, then they broke my water and she was mad and came out immediately afterwards, angry.  This one didn’t sleep all the time.  This one wanted to be held at all times.  This one didn’t like to sleep, and she didn’t like to be in bed alone (which my husband has pointed out several times could be a big problem when she gets older.  I’ve told him I really don’t want to hear that right now.)  Not only that, but from day one she has voiced her opinion, loudly.  Yes, she has lungs.  AND personality.  LOTS of personality.

The first child was so logical about the world.  This one was everyone but.  We started out with Spock, we now add Eviela Knievel.  She never stopped moving in the womb, and hasn’t really stopped since-and now I know what she was doing in there the whole time.  This now four year old runs, jumps, tumbles, dances from the time she gets up until it’s time for bed, except when she’s cuddling with Mommy.  She’s never been afraid of anything logical like heights.  She jumps off of everything-the headboard of her bed has been used quite often for a diving board.  She dangles across the stairway railing on the WRONG side, hanging in midair and rolling her eyes at me when I tell her not to.  She climbs up slides and goes back down them backwards.  Yesterday my husband caught her riding her bouncy ball on the trampoline.  It’s a good thing she’s so athletic-she’d sure fall a lot more than she does if she wasn’t.  Thank goodness for that, she screams enough as it is.

She’d like to rule the world someday.  Right now she practices on her older brother.  I’ve lost count of how many times the Professor has been in trouble for something that he claims “SHE MADE ME DO IT!”  Not only does she try to command people, she also commands attention.  Apparently we never ever pay attention to her.  On top of that, she loves to argue.  Look out future debate teams.

We’ve never bought into the whole princess thing.  Yet somehow we managed to have a girl who loves all things princess.  We regularly point out to her that she is NOT a princess.  I don’t think she believes us (I guess there’s a silver lining in that-that makes me the queen.)  She also enjoys things that are not so girly.  She loves the Avengers-she actually saw it in the theater with us and almost behaved.  She loves her Daddy simply for the fact that he will roughhouse with her.  She will play with her brother’s Star Wars and Superhero action figures, but most of the time just prefers to do art and play Princess My Little Ponies as long as her Mommy will do it with her.

I’m quite a bit nervous about when she starts school.  She reads some.  She wants to work on the same stuff her brother does, but she wants to do it on HER terms.  “Mommy, TEACH ME TOO!”  At the moment she’s bored to death of being at home, but happy that she’s home with Mommy because every day is a girl’s day.  I’ve made a big basket of art projects to keep her occupied, but she wants to do them ALL.  Not so sure how long all of that is going to last.  Today I managed to stretch out one project into at least 45 minutes.  She wanted to make “animals” out of sparkly pom poms and craft sticks.  We made a worm.  She couldn’t wait for it to dry.  I taped two toilet paper tubes together for her to make a “worm house”, complete with windows, blanket, and worm food.  Unfortunately, since she was so impatient her little worm lost part of its body.  I glued the worm back together and warned her that she had to leave it alone until it was dry.  Ten minutes later she was trying to play with it.  Poor little worm.

Her imagination is so great.  That is one thing that her brother has a hard time with.  She is always making up things and playing.  He has a hard time with anything that’s not fact or based upon something else.  If they play something that has to do with a TV show, he will demand that they play it exactly to script.  She will make it up as she goes along.  The scientist and the artist.

We often call her Princess, but not like you’d think.  Oh no, we don’t do that.  If we refer to her as Princess, it’s more like this:  Princess Tantrum, Princess Pouty, Princess Poopypants, Princess Buttcheeks (we seem to not be able to keep our pants up, no matter how much they are adjusted-she seems to have a permanent buttcrack), Her Royal Tiredness, and so on and so on.  This is because there are no princesses, at least in our house.

People wonder why I’m exhausted-the reign of her royalness is tiring.  She loves her Mommy-she commands attention all day and all evening, and sometimes into the night.  Remember, this one doesn’t like to sleep.  She also wants to be near me at all times.  Anytime anyone else tries to sit next to me she must intervene and stop that nonsense.  The brother, the dog, the cat, any cousins that come to visit.  Jealousy runs wild in this one.  It’s good that I am so loved.

I’m done having kids.  Partly because I’m too old to be having more, partly because after her I don’t need any more, and we just don’t have the room.  I have a boy and a girl, so that’s ok.  I’m lucky that I was blessed with two very different personalities.  And also that she was not twins. 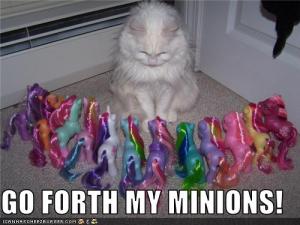 2 thoughts on “Enter The Princess…”