I’m wondering if I will have this conversation with my kids someday?

I guess I could say I’ve come a long way the last few years.  In this past year you could say that I almost am current with technology. ALMOST.  I will probably still be one of those parents whose kids understand the stuff better than I do.

I’ve had this blog set up for awhile to post on Twitter.  That’s all I’ve done with it, because I tend to shun whatever everyone else is doing.  I don’t necessarily desire to be like everyone else (not to mention I didn’t really understand it).  Like I watched Desperate Housewives until everyone else was raving about it, then I lost interest.  I don’t watch Reality TV, or anything that normal people really like.  I never even really texted until my I figured out it was the only way I could get anything through to my husband (because EVENTUALLY he would look at his phone).  Honestly I didn’t have a smartphone or a laptop for quite some time.  The most advanced thing I did for years was pay bills online.

However, I succumbed to peer pressure this weekend from The Bearded Iris, a very funny lady who writes a very funny blog.  She wrote a blog about PMS, and I shared my somewhat witty post with her.  She told me I had to “Use the Twittah”.  So I gave her my handle.  Not only did she hook me up, she even gave me a shout out on Twitter.  How nice!  In addition she referred me to  “Some Twitter Truths You Need To Know” on her blog, which is actually pretty handy. ADD me is going to have to print it out and use a highlighter to figure it all out, because that’s how I roll.  I know, how ironic is that?  People who use paper, funny, right?

So I went forward with it, made a few comments and posted a few tweets of my own.  I am now a proud member of the PMS Club.  I’m not sure what the membership cards will look like, but it’s nice to have someone to commiserate with.  I also found some new blogs to follow, as well gained a bunch of followers myself.  That’s cool!  Welcome to all the new followers, I hope I’m entertaining enough to keep people coming back, and more coming to take a look. 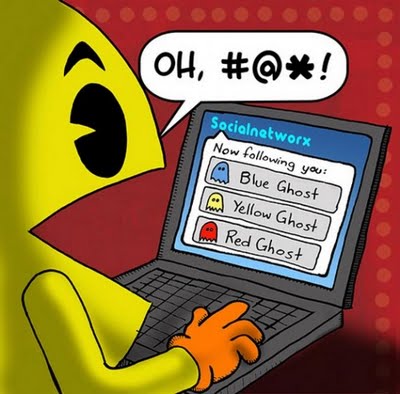 While I am busy not trying to get too attached to technology, The Professor is using an Ipad at school.  The school got a pretty cool technology grant, and I believe they have enough Ipads so that there is one available for each student to use in the classroom.  That’s all I have hear about are these Ipads.  I am sure they are cool, but no, we are not getting one any time soon.  I’d rather spend my money on more important stuff like, oh I don’t know, my utility bill?  He and the Princess are stuck playing games and visiting websites on the ancient Dell laptop that got me started actually doing stuff on the internets.  I bought the laptop after getting tired of fighting my husband to use the desktop computer, since I had extra money coming in at the time with my preschool music classes.  This is the computer that I swear caused the economic downturn-I ordered it off of Dell and the day it arrived my husband’s workplace announced they were shutting their doors.  Nice timing, Sarah.  I shouldn’t have been surprised that right after I got my smartphone the place I worked decided that my employed decided to downsize my job.  I should have recognized the pattern by now, I buy something for myself, bad things happen!  I really need to stop that.

I now have my husband’s refurbished laptop, while he got the laptop that would supposedly take over the world.  You have to have that stuff when you’re an Evil Genius you know.  Having a computer that actually can do stuff has been great.  That was what helped me finally get into blogging.  I actually watch stuff on YouTube.  I spend way too much time on it, but then again, I don’t have a lot else to do these days.  I’ve done a few other things with it that haven’t quite come to fruition.  Like getting Photoshop Elements when it was really cheap.  It’s great, if you know how to use it!  Instead, I continue to use Picasa.  The Grocery IQ program?  Working better than I had intended, but it’s not foolproof-if your phone doesn’t get charged like it should and it dies on you, you have no grocery list to look at.  That didn’t work so well…

While I’m raving about my new feats and good intentions in technology, the rabbit ears are revolting on us.  I publicly fired PBS on Twitter this past week for no longer coming in on the TV, even if we sat perfectly still.  How dare they!  I’m not sure if conditions have to be perfect or what.  Princess Tantrum was most unhappy, and I realized just how much I get done when she has her couple of favorite shows to watch.  I tried turning on their laptop and letting her watch her shows on the website.  She didn’t like that.  She would watch a little, play a game, and then shut the laptop off after a few minutes.  Then she would tell me she wasn’t done, and we’d start all over.  We’d have to turn it back on, wait for it to boot up, etc, etc.  Remember my great idea that we could just hook up the laptop to the TV and watch our shows?  If I could only get him to relinquish the thing for a little while, this might just happen.  Damn you, Bejeweled Blitz!

So we’re about halfway there, but I doubt we’re ever going to be the most current ones on the block.  How up are you on technology?  Do you think you could live without it?  I’m sure I probably could, but I definitely would miss it!

Well that’s certainly one way to look at it!

5 thoughts on “One Mom Dragged Into the 21st Century”