Saturday I posted this picture: 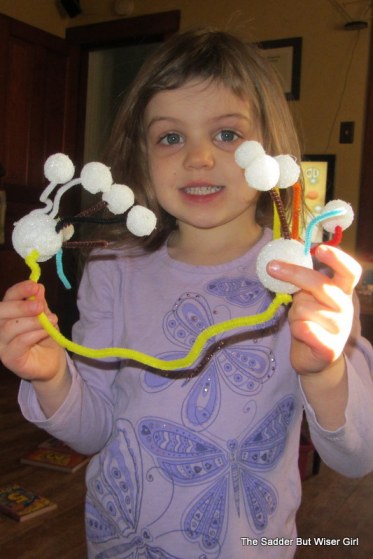 She was so stinking proud of herself, except that she didn’t know what exactly it was.  She kept changing her story.  It was flowers, it was an alien, it was a thing.  The one thing she was sure of was that it was for me, because she lodes me.

Then Evil Genius came home, took one look at it and said “Hey, she made a molecule!”  It figures that this would come from my husband, the man who took quantum physics FOR FUN.

This piqued The Professor’s interest.  He piped up “What’s a molecule?”  Thus began a scientific journey.   They talked about atoms, and protons and neutrons and isotopes.  At some point the big giant Chemistry 101 book came out.  They spent a good chunk of the evening discussing chemistry, including poring over the periodic table and discussing what the different letters were for.

So now my son is trying to memorize the periodic table.  Yeah, you saw that right, THE PERIODIC TABLE!  He’s eight, and he is absolutely obsessed with it.  Of course me being me, I made the mistake of having Evil Genius pull up the periodic table song on YouTube.  Now he wants to listen to it over and over, because he wants to learn ALL of the words.  For those of you who have never heard it, it’s all of the elements on the periodic table set to the tune of “Modern Major General” from The Pirates of Penzance.  And yes, I included the link:

Interestingly enough, although I have seen the Pirates of Penzance, I know the “Modern Major General” song with different lyrics.  My sister and I were obsessed with The Pirate Movie,  which is a spoof of the Pirates of Penzance, when we were kids.  I know that the original song doesn’t have the lyrics “Maaaaaan, I’m older than the Beatles, but I’m younger than the Rolling Stones…” in it, but every time I hear that tune THAT’S what I think of…

The geek part of me is thrilled, the not so geeky part of me is having some pretty bad flashbacks.  I almost flunked Chemistry.  I barely understood it, and it didn’t help that we moved in the middle of the year from Florida to Iowa.  Fortunately I had a wonderful, very understanding teacher who spent a lot of time with me and helped me pull a C in the end.  Don’t ask me to tell you anything about it because I really didn’t retain anything from the class.  I do remember that we watched “Connections” with James Burke a lot.  I didn’t actually remember his name, but I just looked up “Connections” on YouTube to look really smart.  Turns out they have every stinking episode.  The only thing I remember about it was that he always wore the same clothes.  Feel free to browse YouTube for it.  Come on, you know you want to.

What I took away from Chemistry is this-“Entropy” is the measure of randomness or disorder of a system.  This is probably the single most useless piece of information I have retained from school.  However, I liked that I remembered that definition so much that the following year I wrote a poem about it in English class.  Yes, I wrote a poem about something from Chemistry. You know, now that I think about it, I could write a song about it.

Entropy
(To the tune of Yesterday)

I took the definition a bit differently than it was actually used.  At the time I thought it described my life, my room, my car.  My life had high amounts of entropy.  Nowadays I’d like to think that it is an accurate way to describe my brain.  So I really don’t understand it, I’d like to pretend for a minute that I know a scientific principle besides the states of matter-solid, liquid, gas, wasn’t there one other???  There is a reason why I took the route that I did in college-no more science classes with lots of formulas!  Which is really too bad, because I am such a sci-fi geek.

Anyway, back to my children.  I hope that people don’t think that we’re like Rick Moranis’s character on Parenthood-that we sit around with flashcards of physics equations and foreign languages trying to cram every bit of information we can into their brains.  Nooooo, they are just naturally weird like we are.  They ask good questions, and we try to be good parents and answer them.  Usually the family scientific discussions revolve around some kind of physics or engineering.  These discussions start with a question about such things and my brilliant reply is “Ask the engineer.”  Believe me there are a lot of these questions, because nobody cares about the things that I know about like music and writing.   Now we’re adding chemistry into the mix.  Before long he’ll be mixing up concoctions and using a bunsen burner in the basement.  When he blows the house up, I’ll blame his dad.  Or I can blame his sister for making that molecule. 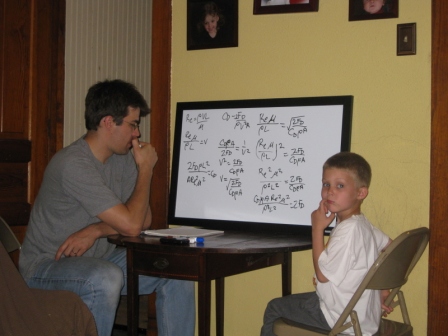 I love this picture, that’s why I’m using it again!

If you still believe I’m a funny person, please vote for me in the Circle of Moms Top 25 Funny Moms Contest!  You can vote once every 24 hours, and vote for everyone you want to.  I’m hoping to be included on the Top Blogs page by the time this posts, probably waaaaay down at the bottom.  That’s what happens when you run with the big dogs…

Ok, ok, I know you want to see what I’m talking about-here just for you is the clip from The Pirate movie that we loved as kids.  Now you’ll get an idea of where all of this insanity comes from.  New followers, be very, very scared...

13 thoughts on “The Periodic Table: It Really Has Nothing To Do With Your Period”