This has nothing to do with this post. It’s just funny…

My sub job is going well, now that I’m a free woman with no criminal history.

Other than the one day that my son decided to ride the bus all over town without getting off at his stop, his hanging out with a sitter after school is going pretty well too.  Once I got over my initial heart attack they delivered him safely to his destination.  There was a substitute bus driver, he was tired, whatever happened was quickly resolved-but for a few minutes there was a large amount of panic on mine and the sitter’s part.

What’s not going so well? I’m still struggling to figure out how to keep people reading this blog.  My viewership is plummeting faster than a lead balloon tossed out of a jet plane.  And I’m not exactly keeping up on my reading of other blogs either.  By the time I get home, make supper, do stuff around the house, blah blah blah blah blah, it’s late and I’m just trying to get stuff out on my blog.  Tonight I spent about two hours on trying to make good on some promises I made to people last week on putting their badges on my blog.  I spent more time tearing my hair out over the fact that I couldn’t get them centered right or the right size than anything else.

You’d think that since I’m still holding on to my kind of not really smart phone that I could maybe at least read some stuff on there.  However, it’s not behaving and that isn’t helping matters. 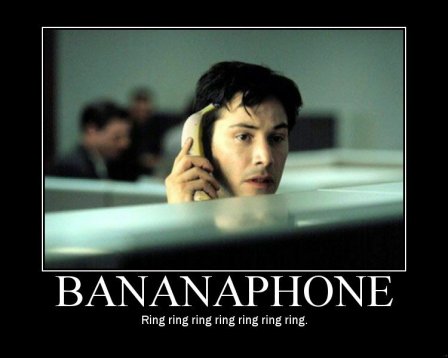 These days I think a banana would work better than my smartphone.

During my breaks I CAN read WordPress posts from my phone.  I can read Facebook, I can also catch up on Twitter.  I have figured out how to post from my phone, with a little assistance from Karen over at Baking in a Tornado. I can’t say that I’ve accomplished much with it.  This is because my phone cannot make it through a day without dying.  Even when it’s charged all night.  It barely lasts until lunchtime.  It’s not tired, at least I don’t think that’s what the problem is.  I just swapped my battery within the last month, and I swear that this one is far worse than the one before it.  I could go over to US Cellular to have them look at it, but here is my dilemma:  I have an hour break each day.  I have been trying to do something good for myself and walk a little each day.  In order to go over to US Cellular, I need to go across town.  If I go across town, I don’t have time to walk, or wait the hour it takes them to help me.  After work?  Forget it.  I’m not going.

Today I thought until I could actually get over there that I would just bring a charger from home.  Smart, huh?  I grabbed the spare charger from the house this morning and plugged it in as soon as I got to work.  Too bad it didn’t work at all.  It’s a Samsung charger, the port fit, you’d think it would work with my phone.  Apparently not.  Therefore in order to use my phone, I have to go outside and start my car and plug the phone into the car charger.  My car does not charge things when it’s not running.

So to sum it up: I’m not using my phone much outside of my house.  Or really at all.

Maybe I need one of these?

Fellow bloggers, I have not forgotten about you.  I had good intentions of getting caught up on everything this weekend, but it didn’t happen as I intended.  Evil Genius decided that Saturday we would make a last minute trip to his parents house.  The reason?  He had to purge our house of a certain Xbox game they had loaned to him.  It was interesting, it was challenging, and it was endless-all things that are not good in the hands of an addictive personality.  It has brought peace upon our household to be rid of it.  Sunday I played catch up on housework. I promise that I’ll be back making witty comments on your blogs as soon as I figure out how to add a few extra hours to the day, or at least get my phone to stay on.

On a lighter note, this past week we ended our Mardi Gras theme week with a costume parade through the school.  Each child brought in a costume from home.  We had the usual array of Batman, Iron Man, cowboy, and a princess or two.  My daughter however, had to do her own thing.  I thought she was bringing her Cinderella dress up costume to wear, but what she pulled out of her bag at showtime was all the pieces to one of her unique creations:  The Armadillo Fairy Princess.  This is the same mammal that has appeared in our house several times.  Don’t ask me where all of this came from-I’m just using it for pure entertainment. 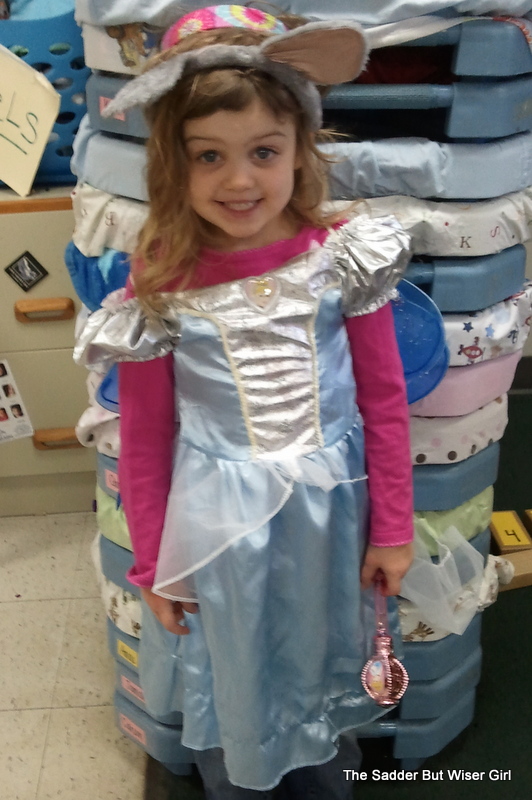 Unique. She is that.