Every so often you meet a blogger that you instantly connect with.  I’ve been lucky enough to meet several such people!  One of these ladies is Stephanie from When Crazy Meets Exhaustion.  I’m going to be perfectly honest when I admit that I found her blog on WordPress very late one night when I was seeking inspiration.  I think I typed in something random like humor, parenting, preschool, and/or humor, and just like that her blog popped up.  Or maybe I found her blog when she was freshly pressed.  Either way, it was late one night, I’m absolutely sure of it.  And I’ve been reading along ever since.

We both are a) educators b) moms c) crazy.  So naturally we run in the same circles in the blogging sphere.  Or is it a cube?

I am a wife of one, mother of two, and English teacher of many. My (paying) job allows me to work from home, and while I love, love, love it, I also miss adult conversation and intellectual stimulation. When I started my blog, I had two kids under the age of two (they’re now 2 & 4 *sob*), and singing the alphabet 23098423424 times a day and teaching a baby to wave didn’t quite fit the bill as “intellectual.” I needed this blog. I. NEEDED. IT.

(She also invites people to send her chocolate and puppies… go over to read her wittiness and find out how).

Sarah and I both teach which means we’re both broke. Bahaha! Just kidding…but not really.

Flip through today’s mindless television shows, and what do you find?

Where oh where is the reality show about teachers? I can’t think of a more topical issue in America than education. Well, except Snooki’s post-pregnancy weight loss, but I mean an issue that affects more than just one pseudo-Italian’s waistline. 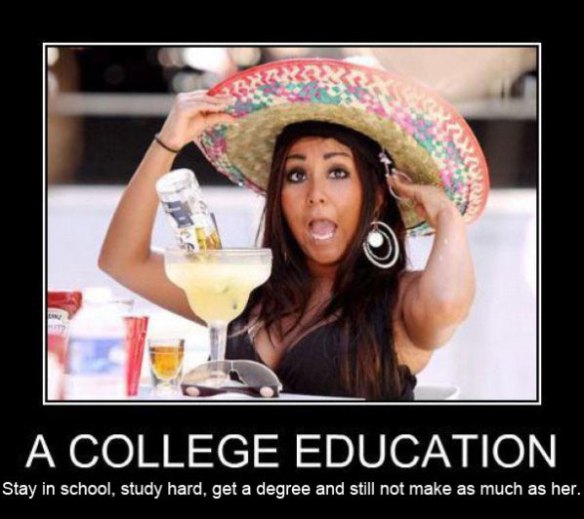 (Sorry Stephanie, I had to put this in. Call it carpe diem)

It’s not because education isn’t a hot mess and wouldn’t attract viewers à la Dance Moms or that awful show about the chubby toddler who wears fake eyelashes, because it sho’ is. And don’t give me all that BS about privacy and whatnot; if Lifetime offered my former school district 1.4 million dollars to produce a reality television show on its campus, you best believe the Superintendent would have turned the library into wardrobe and makeup.

No, the real reason that no reality show about education exists is because if the world saw what we did all day, every day, it would quickly become evident that

That last one sounds awful, but the truth hurts. And my truth is this: over half of my time in the traditional classroom was spent breaking up and mediating fights; counseling broken hearts, driving kids home; buying hot meals; listening to gut-wrenching abuse/drug addiction/fill-in-the-blank-with-your-experience stories; explaining right from wrong; living my life in a way that I wanted my students to emulate.

Teaching is no joke.

And I guess that’s why there is no trendy show about it; it’s no laughing matter. To burden TV Land with such a serious national plight would be a bummer and who has time for that? 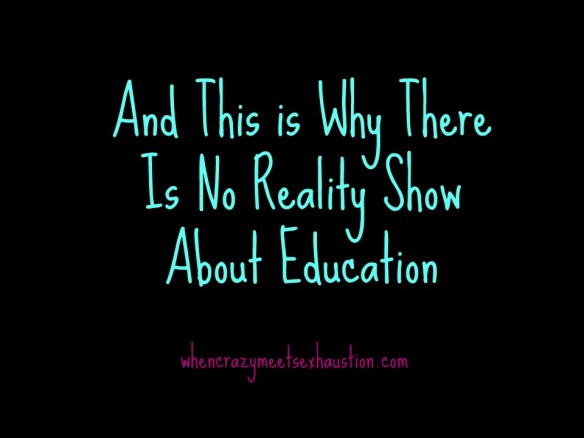 34 thoughts on “The Reality of Education”