Be cool.  Be a part of the Theme Thursday experience.  It happens on, well, Thursdays.  How do you do it?  It’s pretty simple-write a post according to the topic listed.  Then on Thursday link it up at Something Clever 2.0.  While you’re there grab the theme for next week and start writing.  See how easy that is?

This week’s theme was early birds vs night owls. 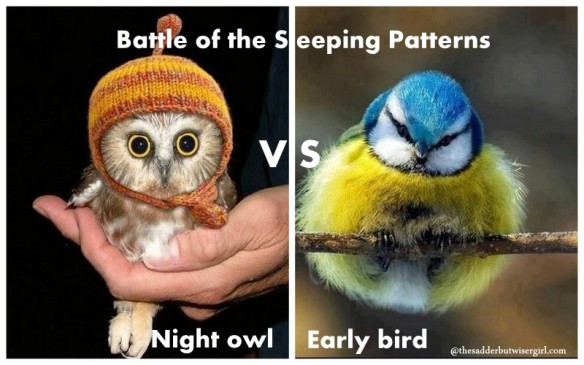 I’m a night owl.  I suffer from a form of insomnia called “I drink too much caffeine during the day and worry too much at night”.  Therefore I tend to stay up until at least midnight most nights.  I also don’t stay asleep as long as I should.  Once the sun is up, it’s a crap shoot as to how long I’ll actually get to sleep.  Sometimes I just can’t sleep any longer and sometimes it’s due to external factors, like a large dog or my daughter.

The Princess is a morning person.  She’s not just someone who gets up early in the morning, she is someone who gets up early and is HAPPY about it.  I understand she gets this from my father (there’s a story about him getting up at the crack of dawn and singing the cheerios song to my mother-somehow she let him live).  Yup, it must skip a generation.  She literally bounces out of bed in the morning regardless of what time she went to bed the night before.  Is this annoying?  Yes.

On the opposite side, Evil Genius takes the prize for morning grouchiness.  You don’t want to speak with him in the morning if it is before 10 am, lest you lose a body part.  I have made the mistake many times of trying to communicate with him before 8 am.  It’s not like I’m trying to make interesting conversation with him either.

Me:  “Have you seen my phone?”
Evil Genius: “RAAAAAAAAAHR!”  (It’s funnier if you picture him as an angry Klingon.)

Since I couldn’t find an angry klingon video, this will have to do:

This grumpiness is advantageous on the weekends.  It usually means I get to sleep in a little later because his side of the bed is closest to the door.  She will peek in the bedroom, see his sleeping form and retreat back to her bedroom.  This only buys me some extra sleep, but I’ll take it. That is, when my body will LET me sleep in.

The Professor uses so much brainpower each day that he requires large amounts of sleep.  As a matter of fact, he is one that I would classify neither as a night owl or an early bird.  He just sleeps a lot.  He is simply disagreeable most mornings, regardless of what time it is.  I can’t win.  Heaven forbid I let him sleep in, but heaven forbid if I wake him up.  Case in point-the weekend.

Saturday:  He is still asleep, but The Princess has me out of bed at 7 am after an hour of asking me to get up.  I check in on him periodically, he is still asleep.  9 am he yells at me from the bedroom.  I go in to see what he wants.
The Professor:  “Why didn’t you get me up?  I’ve been in here waiting and waiting for you  to come get me up!”  (He was asleep five minutes before that.)

The next day:  The Princess has me out of bed at 7:05 am this time (thanks for the extra five minutes sweetie).  At 8 am I go in to wake The Professor up, because after all he yelled at me the morning before…
The Professor:  “Why are you waking me up?  I want to sleep in!!!!!!”

What are you?  Are you a night owl?  An early bird?  Neither?  Leave me a comment and let me know!

This post was brought to you by whatever keeps me up until 2 am despite taking Ambien.  Be sure to click on the Theme Thursday button at the top of the post to see what other kinds of people lurk in other houses.

16 thoughts on “Battle of the Sleep Patterns”