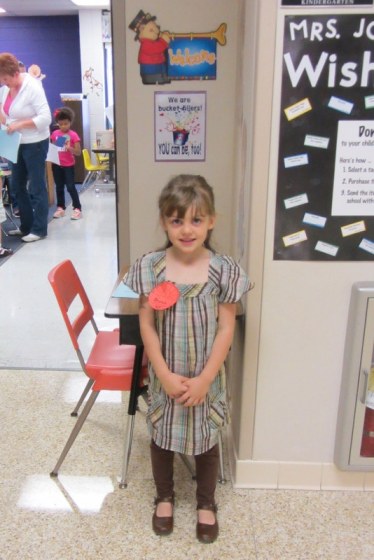 At her kindergarten visit.

Since she read the story “Kittengarten” in her High Five magazine last year, The Princess has been interested in kindergarten.  But she chose her words carefully. “That would be fun, but I’d miss you.”

But as the start of the school year drew closer it was increasingly obvious that she REALLY needed to go to school.  There was no question that this kid needed to have some time apart from her mommy, whether she thought she needed it or not.

Let’s be frank, mommy sure needed it.

Oddly enough, the “first” day of kindergarten here is a half hour long.  There are two shifts that parents can come in with their child and help them tour the school.  There were activities and stickers and muffins and orange juice.

I hated to break it to her that there would not ALWAYS be muffins.

Part of the visit included the kindergarteners getting to go all over the school to find where all of the different rooms would be located:  Music, PE, Art, etcetera.  The very last stop on the tour was a school bus out front of the school.  She was a bit put out with me that I would not drive her home in the bus.

This short little visit to school did nothing to convince her that I was not going to be at her school all day every day.  We even talked about it that night,  I’m pretty sure that she thought that I would be right across the hall or hiding in the closet.

(As a rule I don’t like to hang out in closets because I’m claustrophobic, but whatever…)

Her first “real” day of kindergarten she picked out her fancy purple sparkle dress  to wear and chose leftover veggie pasta to put in her pink thermos for lunch.  Such a contrast to her brother, who wanted to wear a superhero shirt and begged for hot lunch because he really wanted corn dogs.

The Princess was excited, but once it sunk in that mommy would not be getting on that bus with her (or driving the bus to school), she panicked. Luckily The Professor was quick on his feet-he was able to distract her, first with the “secret” passage by the school and then with stories of how much fun it was to ride the bus.  It worked I was really, really proud of that boy that morning! 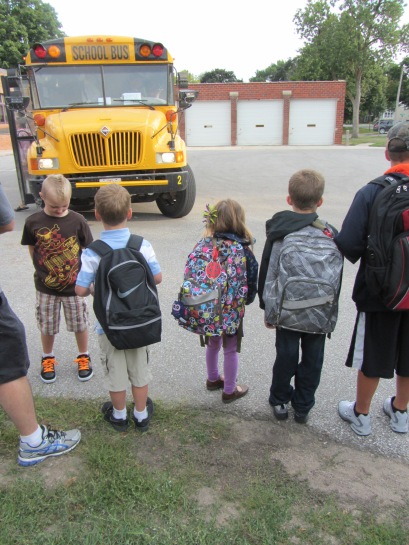 Getting ready to get on the bus.

Then the bus arrived and off they went.  I didn’t get any actual pictures of them getting on the bus like the 43 others moms with fancy cameras that didn’t have dead batteries.  And surprisingly I didn’t cry-probably because I got it all out of my system with my last post about kindergarten.

It was a bit surreal spending the day by myself.  I can’t say that I did much.  I didn’t lay around in a bubble bath eating bon bons.  Instead I spent it fighting off a wannabe migraine and running errands.

When asked hat she did in kindergarten she announced:
“We had nap time for just FIVE MINUTES!”
Me:  “Five minutes?  Why?”
“Because that’s how Mrs J wants it!”

Of course the first week of school one of her classmates had a birthday.  The Princess was so excited, because they got cupcakes!  She’s since been totally obsessed with the snack calendar.  Sometimes she comes downstairs from her room more than once to make sure that she knows who is bringing the next snack, and to make sure there are no changes.  I had to inform her, however, that the reason her friend brought so many cool things was because it was her birthday, and that we would not be supplying cupcakes until her birthday at the end of the school year.  Sorry Charlie, it’s fruit snacks or crackers for snack when we have to bring it.

She’s had a lot of fun planning for school.  She lays out her outfits and coordinating jewelry the night before.  The only issue she has really had was with the black mary janes I bought for her.  She doesn’t want to take them off, and they are supposed to wear tennis shoes for PE days.  She sadly informed me that bringing the athletic shoes to change into at PE time simply wasn’t an option because “Mrs J doesn’t want fancy shoes on PE day.”

Fortunately my daughter hasn’t forgotten me yet.  She’s still very much wanting me around.  As a matter of fact she begged me to join her for lunch every day.  I finally gave in and came for pizza the second week of school.  They have the very same pizza and chocolate milk that I enjoyed at school as a kid, except that they get to have chocolate milk every day.  We could only have chocolate milk on Fridays.  Kids these days have it so easy!

So kindergarten?  So far, so good.  And Mommy has had very little time to miss her little one-good timing with the new job!

Both kids on the first “real” day of school.

31 thoughts on “The Truth About Kindergarten: Mommy Won’t Be Driving The School Bus”