Did you miss me the last few days?  Do you feel like I kind of left you hanging there?

Previously on The Sadder But Wiser Girl… 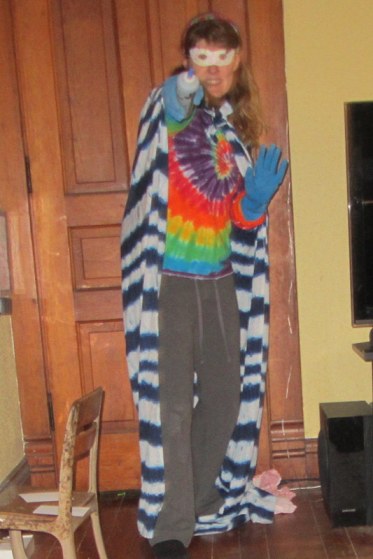 Sewer grossness be gone!  (Because I have to put this picture in whenever I can…)

We last left our sort of heroine counting her blessings after the sewer backed up into her basement and left behind an odor similar to what one can only imagine the bog of eternal stench would smell like.

I was a little busy, but I managed to keep writing some stuff.

Enter the family Christmas this past weekend:  A little more than twenty four hours spent doing Christmas with two different families two and a half hours away from home.  Plus a visit to a third on the way home. Busy, busy, busy.

My stomach was rumbly.  I figured it was just all of the fish chowder I ate.  Or stress.  Or lack of sleep.  Or kids.  Or that I’m crazy.  I downed a Coke or two or seven and ignored it.

And while we were doing Christmas we received quite a few gifts.  However we got one additional one that we were not expecting.  A wonderful group of people in the blogging world got together to help us out in our time of stinkiness by making sure that we didn’t have to wait until after the fact to celebrate our Christmas day at home.  It’s something that I’ll never forget.

Again, for the zillionth time, thank you my friends.

Thanks to this thoughtful gift, the Monday after our weekend jaunt was spent at Target getting the presents that we had been putting off.  Even though I’d been up all night the night before with a stomachache, I was dead tired, and I felt like my food had been sitting at the bottom of my throat for two days, I was going to get my shopping finished!

As it turns out, I was pretty much spot on.  After I finished all of my shopping, I topped it off by puking for five minutes in the store bathroom.  Pretty much everything I had eaten the past day or two.  Isn’t that magical?  I’m sure that the people in the bathroom who heard me making sounds like I was dying thought so.

Then I came home and slept and puked and slept and puked in a vicious cycle that lasted through Christmas Eve.  I know there were things going on around me.  My kids played, they checked on me, they asked me for stuff.  At times I even responded with a half conscious “Honey I love you, I’m not being lazy I’m just really sick.”

I vaguely remember Evil Genius wrapping all the presents, doing the last minute grocery shopping, cooking all the meals, renting some movies, and even washing some dishes.  If there was a medal for that, I’m sure I’d dip it in chocolate and give it to him.

I said I wanted to rest and not gain any weight this Christmas, I didn’t mean it quite like that!

Luckily, I recovered enough to enjoy my kids opening their presents, and a wonderful dinner and dessert cooked by Evil Genius.  I was even conscious for most of it.

See the tie-dyed shirt that Evil Genius is wearing? Is that not the coolest shirt ever in the history of geekdom. And sadly not in my size.

Now that Christmas is over, it’s back to the real world.  I’m still not feeling well *urp* but there are no more excuses and I have to work as well as attempt to do those things known as chores.  The kids are for the most part well entertained by their gifts, except when they’re not.  Yesterday as I attempted to do the working from home part of my job I heard my daughter yell at least once “Mommy I’m LONELY!”

Translation-she’s ready to go back to school already.  We’re only a little ways into the SIXTEEN day break that the kids have this year.  Wow.  They have it rough.  We may not survive this…

The Professor is good, because he has a lot of screens to look at and that makes him happy.  Except when he’s not.

Oh… and the Christmas card?  Remember that from last week’s Fly on the Wall post?  After all that had happened, I thought I had better be a good girl and take them with me while I was visiting family and work on them in the spare time I foolishly thought I would have.

Then I left them at my mom’s house, because apparently the flu which infected my gut had already seeped into my brain, I just didn’t know it.

Once my brain began comprehending things, I mentioned something to my mom and she immediately sent them to me, only they no longer can be considered Christmas cards.  We’re now in the beginning stages of turning them into New Year’s cards, with only a few days before I have to send them.  The beginning stages as in I bought stuff to make them with and have felt too lousy and had too little time to do anything with them.

We’ll see how long before I just give up and figure that this year Christmas has just officially kicked my butt.

I hope you are all having a joyous holiday thus far!  I hope you actually got your Christmas cards sent out, enjoyed a lovely time with your family, and are enjoying the stretch of time between the two holidays without any sort of poop or puke in your midst.  Let me know how your holiday went by telling me in the comments! 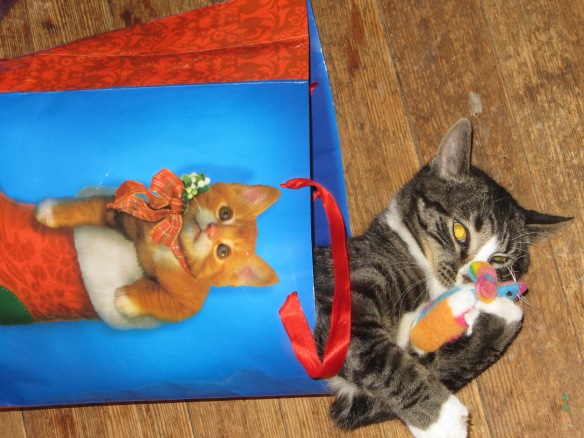 Where else do you play with catnip mice but in a Christmas kitty bag?