This is an updated version of a post that I shared in September of 2012. Things have changed quite a bit since then, but I thought it would be fun to rework this for Finish the Sentence Friday!

A couple of times recently the Princess has announced, “When I grow up, I will get to do whatever I want!”

I replied to this, “Ok honey, you just keep thinking that.”

And maybe she will, being the confident little thing that she is.

As a child and a teen I wanted to be a teacher.  That didn’t pan out well, now did it?  I guess being a published writer is my next goal…  In time grasshopper, in good time.

The Princess has told me on several occasions that she wants to be a doctor when she grows up.  Or a cowgirl.  They’re so close, don’t you think?

The Professor thinks he wants to be a baseball player.  This is new, because up until this announcement he has wanted to be a race car driver like Jeff Gordon.  But then again, he has also informed me that he will take over for one of the school’s fourth grade teachers when she gets too old to teach.  Hmmmm… that easy, huh?

I must admit that I admire my husband for the fact that he has always known he wanted to be an engineer, even though it took him a long time to get there.  I guess that’s how you know you’re a grown up, you know what you want to do?

Hmmmm… A lot of grown-ups have bucket lists.  Someone recently asked me about my bucket list.  I guess I really don’t have one.  I have joked about taking pictures of different buckets and putting them on here.  I guess I don’t really have one because the things that I really want to do seem so out of reach.  I’m horribly, horribly practical.  Lack of money can really do that to a person.  If you can’t have dreams, then what is worth reaching for?

Isn’t the bucket list what you want to do before you kick the bucket?  Well I don’t necessarily have a bucket list.  I just have some things that I would someday would like to do.  Horribly impractical and probably will never happen.  But perhaps if I am to be “real” grown-up then I need to have this list!

Or perhaps I shall just not be a grown-up at all. 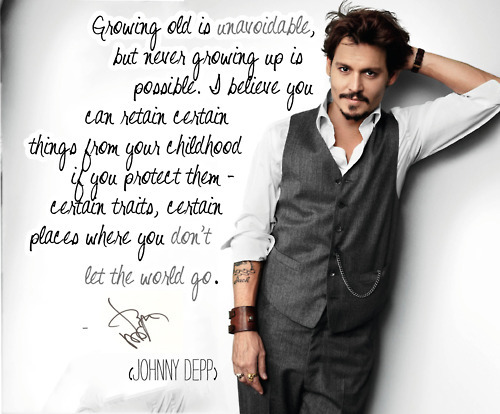 Well said, Mr Depp, well said.
(This is one of many nice quotes and images from Quotes Factory, click on the image to take you to the website.)

The most unexpected part of being a grown-up is… not being able to do whatever I want when I want.

This post is part of Finish The Sentence Friday, cohosted by these very lovely ladies:

Can I Get A Bottle of Whine With My Morning Quiet Time?

Janine’s Confessions of a Mommyholic

Please visit one of the wonderful co-hosts.  Maybe you have something you’d like to share just for the occasion?  If so, LINK IT UP!  🙂

20 thoughts on “FTSF: The Most Unexpected Part of Being A Grown-Up”