My daughter would think this is cute. Awwww Mommy look at the little baby beer!

The story of Christmas is a pretty amazing story anyway.  Put it in the hands of a preschooler and you’ve got a whole new spin on things.

It all started with a plaster nativity set.  You know the ones they sell at Wal-Mart?  Grandma had sent one up a while back for Princess Creative to do her magic.  Of course, Mommy doesn’t always look very closely at things, and I failed to realize what it actually was (I thought it was a bunch of farm animals, honestly.)  We had been trying to figure out what exactly we could make nativity people out of, and had been hoping we’d find some old fashioned clothespins or something.

Upon the realization of that hey, we had the goods, the creating commenced.  She painted the figurines.  They look like they either had a day at the mud spa or are really lacking in personal hygiene.  Once this important part was completed, I offered to help her build a manger out of cardboard.  She refused.  She told me she had something in mind, and disappeared upstairs. 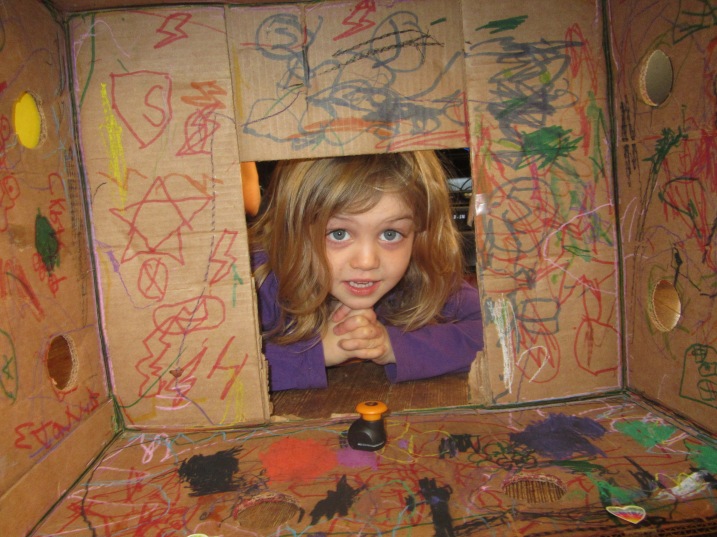 Who could say no to this budding artist? I have a hard time with it!

She returned with a box from her room.  She hoards this stuff upstairs, you know.  Then she began collecting recyclable items from all over the house.  What resulted was an amazing manger with all of the state of the art stuff.  Because nothing is too good for the messiah, you know.  It includes:

Hot Tub-This must be where the animals party. 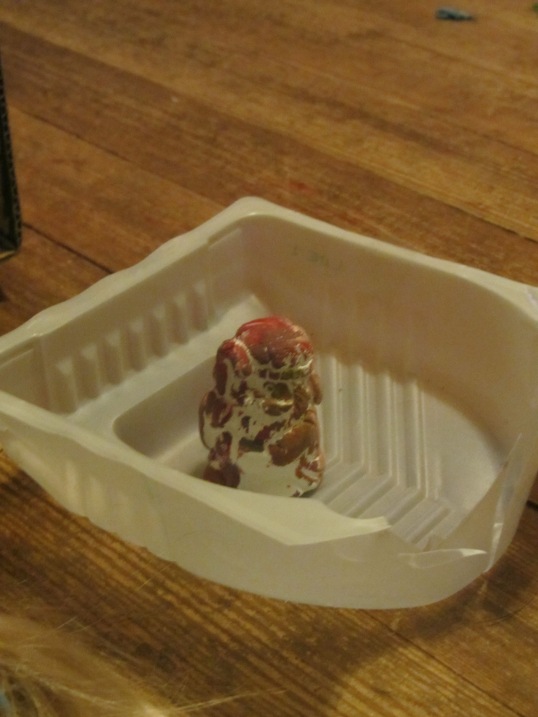 Then she sets everything up in the living room.  She confesses that she can’t find baby Jesus.  What I SHOULD have said was that baby Jesus is born on Christmas. What I said instead:  Go find it.  When she couldn’t find it, I told her to think of something else she could use.  So she compromised.  Now we have two wise men, joseph, a lamb, a Sonshine Family baby with crib and teddy bear, three Barbie dolls… and the list goes on.  The manger is the place to be, complete with lots of Barbie baby toys.  I understand the Hello Kitties came by to hang for a spell already.

The manger… the partying is happening early…

Its probably good that we do not own an Elf on the Shelf.  I’m sure if he came by there would be all kinds of bad things happening.

So people with the cool mangers you bought at Target, don’t judge!  It may not be pretty, but it came from a very beautiful  imagination.  I still think she believes a manger is like a motel, just with animals, but we’ll go with that.

We had a neat one as kids.  It was one mom had made from a stained glass kit.  Very pretty.  I can remember being obsessed with the whole idea of the nativity.  And angels.  I always wanted to play the angel in the pageant but never did.  I’m not sure why I wanted to do that.  I must have wanted the Jelly Toast.  You know, from Hark the Herald Angels Sing-“With the jelly toast proclaim…”

Did you have a nativity scene as a kid?  Was it homemade or store bought?

I think this has to be my favorite nontraditional manger. I couldn’t resist sharing-I saw this on Facebook.

I am married to an engineer.  A mechanical engineer.  He wasn’t actually an engineer when I met him, he was only aspiring at that point.  It took him many years to get to where he is now.  He just started actually BEING an engineer this year.  He designs stuff.  I’m not really entirely sure what he actually does at work.  He draws pictures.  He gets free pop and popcorn.  He gets a free gym membership (have I mentioned I’m jealous of the gym membership?) 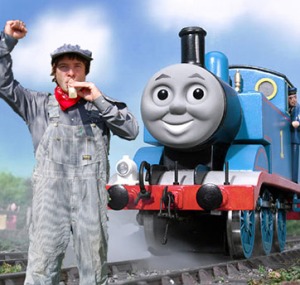 Not THAT kind of engineer… 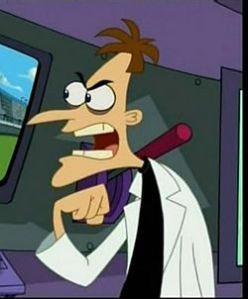 The deck:  We have a pretty nice fenced in backyard.  There is a concrete patio area out there.  For some reason, he felt we needed a deck.  Is that a guy thing?  I had no strong deck feelings either way.  What started out as a very small deck turned into a quite large deck complete with rails and lights and a transformers looking gate.  The deck is still standing, the gate didn’t make it.  Don’t get me wrong, I have enjoyed the deck!

Then there was the Barbie house.  My daughter had just turned three.  She was obsessed with my old Barbies.  At one point while watching her enjoy the Barbies he got a wild hair, as he calls it.  It started out small, and then grew and grew and grew.  You see, engineers have to build things to scale.  So he built a three story Barbie house based on the dimensions of a real house.

It’s big.  You can fit humans in it.  It’s deep.  I often walk in to find my daughter’s behind sticking out of it.  At least she’s using it now.  There for a long time she would simply take everything OUT of the Barbie house.  Barbies sat at their table eating food on her bed.  Not sure if that is something that little girls dream of (WOW a house that is nothing but a bed…).  Or all of the Barbies would be out on the floor, possibly meeting their fate of being stepped on by Mom in the middle of the night.

The Barbie house remains unfinished.  It has fared better than many projects in our house.  I have done a lot of work on it-I “wallpapered” rooms (scrapbook paper and modge podge), painted rooms, made mattresses and blankets, not to mention spent hours perusing rummage sales and online auction sites looking for furniture.  The outside that was supposed to be finished with trim remains undone, the roof has yet to be assembled, I finally gave in and painted the outside.  I guess I can’t complain considering the lumber that is now my sons bed sat in the living room for months waiting to be put together…

At one point recently he told me he wanted to scrap the whole house and build a new one.  ARRRRRRRRRRRRRRRRRGH!  I have a couple of things working in my favor here-the fact that he works a zillion hours a week and the fact that he has to be properly motivated.

The very latest project just recently was completed-that would be my son’s bed.  It finally got painted after years of being left undone a couple of weekend ago.  It’s quite nice.  Now if only my son would actually stay in his room when he’s not being punished!  Now my husband wants to build our daughter a canopy bed.  She doesn’t even know what a canopy bed is but she thinks that if dad wants to build it therefore it must be cool.  She has no idea what she could be getting herself into.  I do…if it’s started it may get completed around the time she starts 1st grade.

I’m not complaining.  I’m sure other people have husbands who do the same thing.  Not necessarily build giant human sized Barbie houses but start projects and don’t finish them.  I guess I am guilty too-the kitchen was partially painted for quite some time and that was my project.  My husband’s parents house has had the same unfinished doorways as long as we have been together-currently they are still working on an enclosed porch that finally got a door that wasn’t made of plastic sheeting.  Much like my husband’s projects, this too was one that started small and got much bigger.  And I wonder where he gets it.

I always have to interject that I married “the interesting guy”.  He would rather be known as an “evil genius”.

No no not that evil genius…