This post brought to you late by HP.  The Printers that forget stuff.

I am loved.  Every day I am lavished with gifts.  Not just any gifts, handmade gifts.  Like this one: 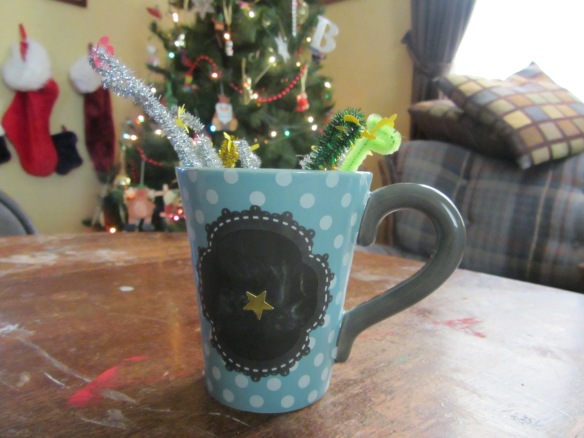 It’s a vase of flowers.  Sparkly pipe cleaners with tiny little flower paper punches that she punched out of construction paper.  I should have been suspicious when she asked me punch holes in the middle of the flower punches.  She then snuck away and returned with this mug that she stole from me.  First she asked me to close me eyes, and then she yelled “SURPRISE!”  Then she told me where I needed to display it.  The whole world needs to see her art, you know.

My daughter could probably open her own Etsy shop.  The kid’s got skills.  At the rate I’m going, she may have to open one to help support us.

She creates non stop many days.  She does art from the time she is done cuddling with me on the couch until I tell her “That’s enough art for the day!”

This one cracks me up.  It makes me think of a Radiohead performance on SNL.  The band is playing and there’s a guy sticking wires in a little box.  Similar?  I think so.  And it’s all mine, sitting right next to my spot on the couch.

She reminds me all the time of why she makes these things for me.  She sings the song from Daniel Tiger’s Neighborhood “Making something is one way to say… I love you.”  She also tells me-all the time, and constantly asks for hugs and kisses.

And there are pictures.  I wrote awhile back about how there is no more room in my house for all of the things that she makes.  She used to draw two tiny pictures on a piece of paper and present it to me.  “Oh I love it, but can’t you add more?”  She would get mad at me and stomp off.  Apparently I was messing with her creativity.  It must have gotten through, because she’s drawing much more on her pictures now.  I would display some, but as usual, my printer thinks it’s missing something.  Today is the scanner.  Who knows what tomorrow?

The dry erase board helped a little with the art pile up, but we’re never allowed to erase it.  I take pictures from time to time.  This particular one is an oldie but a goodie from this past summer.

For Christmas Grandma presented both kids with a big box of stuff.  The Professor received a box of science stuff so he can get to work on solving our world energy crisis.  She received an art box full of art products in addition to a big bag of recycled materials to use it with.  She was thrilled.  She’s a funny girl.

One of her recent creations was made partly with stickers from the box, partly from a picture frame kit that I had picked up at Goodwill.  Oh, and scotch tape.  She was giddy when she presented this to me along with two others.

Alright, I’ll take it.  That way in a few years when she starts to loathe me I have this among many other reminders of that sweet messy haired girl who used to “lode” me.