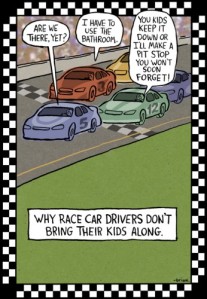 They bring them to the races, they just don’t put them in the racecars…

I guess you could say I’m a NASCAR geek.  WAIT!  Hear me out here.  If you don’t like the sport, just read this post. If you still think that all fans are drunk people without shirts, keep in mind that I keep my shirt on during all races.  I’m writing this because I wanted to let people know that while I am not a big football fan, there are other sports I find more tolerable (and understandable) than that sport.  There are a couple of sports I even really enjoy.  NASCAR happens to be one of them.

I love NASCAR.  I didn’t when I met my husband.  As a matter of fact I didn’t even after being married to him for awhile.  I guess I thought it was just like the races that I went with him to sometimes at our local track, just waaaaaaay longer.  I had been to some different kinds of car races but had never been exposed to the big leagues.  That all changed when NASCAR 360 premiered on TV. It followed three different drivers each week.  It showed NASCAR drivers in their natural habitat (not just the racetrack).  It was funny-it turns out that there are a lot of interesting characters in the sport.  I saw them as people instead of crash test dummies in race cars.  As I watched this show I also started to watch the races instead of them just being background noise. Not only did I start watching and liking the sport, I even participated in the NASCAR fantasy league at my husband’s work, and did pretty well.

A few things to note:  not all women who like NASCAR like Danica Patrick.  I don’t.  Don’t get me wrong, I’m all for women in racing.  I also don’t tend to like the drivers that everyone else seems to like.  I also don’t like beer.  I even wear clothes that cover my body.

In April I went to my very first live NASCAR race at the Kansas Speedway.  I wasn’t sure if I’d like it.  Come on, I’m ADD-I can’t sit still that long.  At least at home there are other things going on and I can come and go as I please, check my computer, go do stuff during cautions and red flags and rain delays.  AND I don’t like loud stuff.  But it was AWESOME!  There are not words to describe seeing it in person.  We sat just a few rows from the track itself.  Other than two small children having to constantly go to the bathroom, I got to see almost all of the race.  It was deafeningly loud-I had to go buy earplugs.  There is so much stuff you can’t hear on the TV.  You can actually tell when someone’s engine isn’t running right by the way it sounds.  You can hear someone blow up.  I’m sure you can hear someone crash too, but unfortunately there were really no wrecks that day.  I don’t watch it for the wrecks, but I kind of wanted to hear what it sounded like.  I did get to see a car go up in smoke, though.  I’d like to go again someday,  but to a different track so I can see how it’s different from what I saw.

Thinking about going to a race for the first time?  Here’s what I learned.  I call these The Four W’s.

1) WEATHER-Bring every type of clothing imaginable along.  The weather will not be whatever they forecast that day.  It was supposed to be warm and sunny.  It was cold, cloudy, and windy.

2)  WALKING-Train for a 5K.  You’ll have to walk at least that far to get from where you park to the track.

3)  WEALTH-Don’t pay for the really expensive seats if you can.  We ordered the cheapest ones that seemed to have a good view.  The seats were awesome!

4)  WON’T LOSE YOUR HEARING-Buy earplugs.  It’s louder than anything you’ll experience, unless you hang out at the airport.  We brought hearing protection for the kids, but ended up having to buy those foam earplugs they sell there. 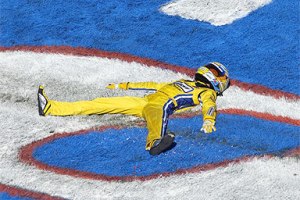 Thankfully it wasn’t THAT cold. There were no snow angels made. That actually DID happen at a race once…

Incidentally, Princess Difficult fell asleep during the NASCAR race.  How she did that I’ll never know… she never sleeps any other time!  The Professor was able to concentrate for the entire event, of course we bought him a program when we arrived.  He always does better when there’s reading material.  And there was popcorn.  Lots and lots of popcorn.  As long as there is popcorn, he’s happy.

What I really like about NASCAR-it’s a very family centric sport.  You always see the drivers with their families.  Many of them travel right with their families by their side.  It’s very rare to hear about the types of scandals you hear involving athletes in other sports.  But then again, when would they have time?  Read up on a NASCAR driver and what their schedule is like-it’s nuts.

I wanted to write a post about NASCAR to not only show that I like and know something about a sport, but also because I’ve been thinking that in a way it can be used as a metaphor for life.  I put these in bold for no particular reason…

1) There are times that due to no fault of your own, things go wrong-Engines blow, people crash.   In the everyday world you can do everything right, and things may still go very wrong.

2)  You can’t make everybody happy all the time-You can win that race or do well, but somebody’s going to be upset about something.  It’s like having kids…

4)  You can be the most popular person, but it doesn’t mean you’re the winner-Can you say Dale Earnhardt Jr?  Everybody may seem to like you, but it has no guarantees in life.

What drivers do we follow at our house?  My son, the former Jeff Gordon fan who hates to lose, will cheer on whoever is winning.  My daughter likes the #16, Greg Biffle.  Not necessarily because of any particular reason, but at the racetrack he had the pink kids hats for sale.  And she got that because noone was in line there.  He was the points leader at the time!  Greg Biffle, the Rodney Dangerfield of NASCAR.  My husband roots for the Busch brothers.  We all sort of root for Kyle Busch, because we really like M&Ms. If you ask Evil Genius if he likes Jimmie Johnson, no, but he’s a huge fan of his crew chief (Chad Knaus).  Someone who can pull off so many spectacular comebacks in races has to be an evil genius too.

And me?  As I said, I have never been one to like the real popular drivers.  I am a Kevin Harvick fan, and I don’t even like Budweiser (or any beer for that matter).  I also like Matt Kenseth – consistent and levelheaded.  He’s also won a whole championship without winning any races.  If you don’t like the Chase format, blame him.

You just have to like a sport that has a sense of humor.  That’s probably why I’m drawn to it.  A few years ago there was a good chance I wouldn’t have liked it.  But now, well, you have to like any sport that puts a guy in a pink firesuit.  (For the record, I hate the color pink.) 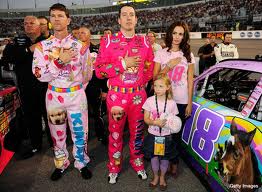 Best advertising campaign ever “Who doesn’t like puppies, kittens, and little baby seals?”