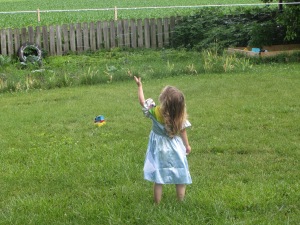 Ah, my little princess. Don’t grow up too fast. Being a grown up isn’t much fun a lot of the time.

A couple of times recently  Princess Confident has announced, “When I grow up, I will get to do whatever I want!”

I replied to this, “Ok honey, you just keep thinking that.”  And maybe she will, being the confident little thing that she is.

I sure can’t say that’s necessarily true for me.  In the last year with all of this unemployment stuff, I had several people ask me what I really wanted to do.  The truth is I don’t know.  I have no idea what I really want to do when I grow up.  I’m 38 years old, and let’s face it, I don’t feel like a grown-up.

I wanted to be a teacher most of my life.  That didn’t pan out well, now did it?  I guess being a published writer is my next goal.  HA HA.

She has told me on several occasions that she wants to be a doctor when she grows up.  Or a cowgirl.  They’re so close, don’t you think?  The Professor thinks he wants to be a baseball player.  This is new, because up until this announcement he has wanted to be a racecar driver.  But then again, he has also informed me that he will take over for one of the school’s fourth grade teachers when she gets too old to teach.  Hmmmm… that easy, huh?  I must admit that I admire my husband in the fact that he has always known he wanted to be an engineer, even though it took him a long time to get there.  I guess that’s how you know you’re a grown up, you know what you want to do?

A lot of grown-ups have bucket lists.  Someone recently asked me about my bucket list.  I guess I really don’t have one.  I have joked about taking pictures of different buckets and putting them on here.  I guess I don’t really have one because the things that I really want to do seem so out of reach.  I’m horribly, horribly practical.  Lack of money can really do that to a person.  No wonder I have been depressed.  If you can’t have dreams, then what is worth reaching for?

Isn’t the bucket list what you want to do before you kick the bucket.  Well I don’t necessarily have a bucket list.  I just have some things that I would someday would like to do.  Horribly impractical and probably will never happen.  But here goes.

So that’s really it.  I don’t want much, do I?  I’m hoping that once our little situation gets straightened out that perhaps we can start going places.  Right now, I’d just like to be able to occasionally buy myself a frapuccino.

Ah yes, the Starbucks coconut mocha frappucino. It rates an honorable mention on my list of faves. I may have to start that list for a future post…