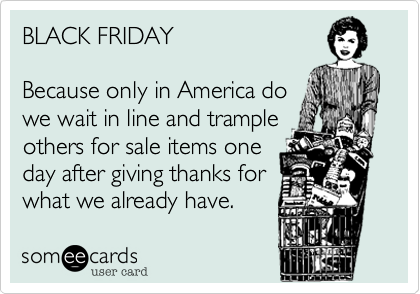 Maybe it’s because I’m already a pretty good bargain shopper, but I’ve never really had any desire to do the Black Friday thing.   I’ve gone once in my life with my in-laws, and I wasn’t really enamored with the whole experience.  You that like that sort of thing can have it!

Each year I go out later in the day after the initial madness has died down, but not for bargains.  We try to get our tree up that day, and I’m usually going out for that one Christmas thing that we can’t live without to finish putting up the tree.  Our tree stand broke last year-we can’t exactly put the tree up without it.  We tried it-we tied the tree to the ceiling with some fishing line.  After it fell over twice, we figured it would be best to just invest in a good tree stand.  It’s always something essential.  We couldn’t find the star for our tree one year.  We looked everywhere.  It wasn’t until after we had packed the tree up and put it away that we found the old one.  Another year we couldn’t get the star to work, or the string of lights wasn’t long enough, or they just plain didn’t work. I believe it was two years ago that I couldn’t find the ornament hooks.  Important stuff.

This year we’re going out later in the morning, but not for shopping.  We’re going to get the kids hair cut.  It’s a bit of a hair emergency-it’s been a while!

There’s just nothing that I really want badly enough for my kids or myself to stand in line for hours to buy.  We’ve never been ones to have to get this year’s “it” toy or item.  I tend to wait until it gets close to Christmas and get stuff when it goes on a good sale, or on clearance.  We buy a lot of things that were never opened or second hand and in good condition at consignment and thrift stores for a fraction of the price they go for in stores.  No stress, no getting trampled, no getting up early.

I have some friends who do it every year.  They make it fun-they go out and get coffee and go out for breakfast beforehand.  I have a cousin who is a whiz at getting some of the coveted items and does it every year.  Maybe if I had a fun group of gals to go out with I might consider it.  Or if I had any money to spend.

This year we won’t be doing much shopping at all.  I kind of wanted to go out later this weekend, but a major snafu at the bank took care of that.  We had two car payments instead of one come out of our account.  No money until the end of the month or until they resolve the issue, one or the other… Bummer.  Oh well, no matter how we’re looking at it this Christmas will be remarkably slim for the kiddos and no gift exchanging for the grown-ups.  Look honey, a shiny penny for you!  What a great gift!  😉

If we did have some money to spend, I’d be trying to help some smaller businesses.  The Saturday after Thanksgiving is Small Business Saturday.  My Dad is a small business owner, as are many of the stores we shop at on a regular basis.  I’m hoping that other people take advantage and check them out!

So for you Black Friday shoppers-have fun and help stimulate the economy.  I’ll be home in my nice warm bed fast asleep! 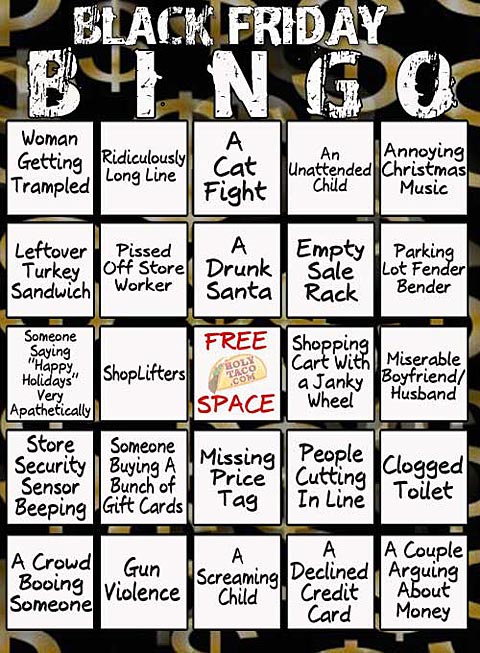 This COULD possibly get me motivated to go one of these years… could be fun!