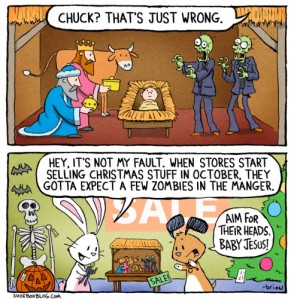 I have a big problem with Christmas before Halloween. They got what they deserved…

We have one rule around these parts.  No Christmas until after Halloween.  I mean it!  I’m not kidding!  Don’t even think about it!  Not a word!

Nothing makes me more aggravated than retailers taking advantage by getting their Christmas on before we go begging for candy.  There was actually a Christmas commercial on yesterday, and I yelled at the TV.  COME ON PEOPLE!  You have almost two whole months to get your stuff sold after Halloween!  Let’s enjoy the spooky season before we start in on the fa la las.  I used to work in retail, at Kmart.  I know what I’m talking about.

There is one exception to this rule.  We usually have to make a Christmas list around this time of year for Grandma and Grandpa.  They start early.  So around the beginning to the middle of October I have to utter the word “Christmas”, as in “What do you want for Christmas?”  Then after that I try to go back to pretending that we don’t care about it until after Halloween.  I ask this first of my son.  “Hmmmm.” He says.  There is silence, long silence.  In fact the silence is so long that I ask him if he remembers what the question was.  He does.  This was something that was not supposed to be a hard question. “Well…” he finally sighs, bringing his finger to his chin as he ponders the question some more, “There is this video game that I want.  It’s a Mario game.  It’s for the Wii…”

I stop him right there, “We’re not getting a Wii.  We have an Xbox.”  Along with at least 17 other gaming systems, just no Wii.  That may bring my children joy.  “Think a little harder.  Surely there’s something that we CAN get you for a system we have.”

“Ok.  Well there’s this other Mario game that I want.  But it’s for a Nintendo 3DS.”  He has a DS Lite, one that we bought used from Gamestop.  We weren’t sure how his ADD would agree with 3D.

He smacks his head and groans, “RRRRRR, I just… can’t think of anything!”  The fists are clenched, and he’s getting angry with his thoughts. Maybe we’ll try this again later.  I relieve him of his frustration by telling him he can go play his DS.

The Professor, last Christmas. It’s usually more of a Chandler Bing smile than this, but I’ll take it.

The next person I ask this question is of course Princess Give Me Everything in the World.  I ask her as she cruises through the living room with her stuffed donkeys, “Grandma wants to know what you would like for Christmas.  Do you know?”  She stops dead in her tracks and turns to look at me, her eyes big as saucers.  Very confidently she tells me:  “YES!  I want the great big Hello Kitty house with the kitchen so that they can cook food, so all of my Hello Kittys can eat.  I want Princess Barbies, Snow White and Beauty and the Beast and Sleeping Beauty, because I don’t have those.  I want a pony library book, but I want one I can keep, forever…”  This continues on for five minutes at least.  It’s pretty obvious that she knows what she wants. 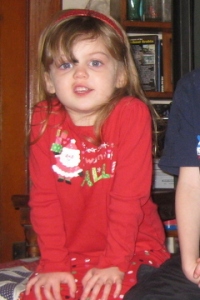 Her shirt says “Dear Santa I Want It All”. Yes, she does. I have the list to prove it.

I really should have just stopped there, and shielded her from all toys until after Christmas.  A few days after this conversation takes place, she and I go out to fill a prescription at Target while her brother is at school.   It is the middle of October, and it is painfully obvious that Santa is closing in on Jack and his friends.  My kids love to go look at the Halloween stuff.  So do I, so that’s not a hard request to fulfill.  They already have their costumes, we’re out trick or treating so there is no candy to buy, and my kids know me well enough that we don’t buy any Halloween decorations until the day AFTER Halloween.  Here is what happened the last time we went to the Target Halloween aisle.

While killing time waiting for the prescription, we go to look at the Halloween things.  Right away I can tell that she’s not interested.  She’s looking at the Christmas lights, and all of the Christmas stuff which is dangerously close to the Halloween stuff.  Her eyes are just as big as they were when I asked her what she wanted for Christmas.  I know what’s coming.

“Mommy, can we look at the toys?” she asks in her most precious little voice.   I eye her suspiciously.  I’m waiting for Admiral Ackbar to come running out and yell “It’s a TRAAAP!”  However, we are not in a hurry for once, so what’s the worst that can happen?

We go to look at the toys.  Now remember, pretty much anything she sees she wants.  Well, any “girl” thing she sees she wants.  Anything with sparkles.  Anything pink, including all the stuff from the Susan G Komen foundation (does she REALLY need a pink box of maxipads or a swiss army knife?  I don’t think so).  As we approach the “Girl” aisles as she calls them, I start speeding up because I know where this is going.  “Mommy, can we put that on my list?  Mommy I want this!  Mommy can we buy that toy?”  I counted about 63 things that she asked for in one small section of an aisle.  At one point, she seriously asked for the entire display of Squinkies.

(Squinkies, for those who are not familiar with these, are the teeniest tiniest toy in the whole wide world. They are the modern version of the crappy stuff that we used to get out of the machines for a dime, they even come in the same plastic bubble things.  If you ever purchase these for a child keep in mind that they breed in dark places-they especially love couch cushions and vents.  Much like DS games, now that I think about it)

At one point I asked her if I should simply write “Target:  The Whole Toy Section” on her list and send it.  She replied, “That would be great!”  Some lady that was in the same aisle as us snorted and snickered, trying to be polite by not guffawing.  I sensed somehow that she was a mom too and felt my pain.

I have told her many times that just because she asks for it or wants it, she does necessarily get it for Christmas.  This does not seem to phase her.  This is why I pretty much steer clear of the toy aisle when we go to any store that has one (which is REALLY hard, because even Kum and Go has toys now!)  Why did they quit sending out the Sears catalog again?  That way she can go through it and circle everything in the catalog like I did, and maybe have it narrowed down to a few hundred items by December 1st.

So Grandma, did you get all that?  One that knows not what he wants and one that knows she wants it all.  However, I think we’ll stick to the original things that she asked for, without all of the visual reminders of everything else she wants.  I know you’ve already started your shopping, but you’ll be getting some sort of list at some point.  My part will be very short.  I just want a new brain.

I’ll take it! Does it come in purple? Do you suppose it could be gift wrapped?

Imagination is a very powerful thing.  My daughter has no shortage of imagination.  That’s why I’m almost a little worried.

Lately she has been begging me to play with her.  Pet Shop.  Barbies.  Hello Kitty.  But it’s not necessarily how you’d think she’d play.

The world of Hello Kitty, complete with weapons, torture, and a giant chicken.

Take Hello Kitty.  Princess Imagination has several of the Hello Kitty lego sets.  These Hello Kitties are not your run of the mill kitties.  They apparently exist in a post-apocalyptic society.  I noticed the kitties had assorted weapons-guns, swords, and axes.  “What are the weapons for?”  I innocently asked.  “They have to protect themselves against the bad guys.”  “Who are the bad guys?”  “The ones who try to steal their candy.”  Those are desperate measures, kitties.  I never realized how violent those cute little things could be.  I’ve noticed some lego guys without arms hanging out there too.  Not sure if they tried to steal candy, or if it’s some form of mutation from the fallout.  Speaking of mutation, there’s also a giant chicken.  Most recently she added the Death Star.  She said its the garage.  Makes you wonder what others say when they approach the Hello Kitty residence.  “That’s not a moon, that’s a space station.  No wait, it’s just a garage.”

I should have known the situation here when she announced all her Hello Kitties were in her room having a battle.

Oh the Barbies have to be the most fun.  Because we girls can do anything, right Barbie?  She has all of my old

Grandpa Snake is caught in many compromising positions.

Barbies.  I not only had the regular buxom blondes but also the Heart Family parents, kids, and grandparents.  Her favorite Barbie is the Heart Family Grandpa.  She latched on to him right away.  He was the first one she named.  “He’s Grandpa Snake.”  Grandpa Snake keeps some pretty interesting company, after all there is a LOT of nudity going on at this Barbie house (note the picture).  When the Barbies take a trip anywhere in their purple Volkswagon Beetle, she makes sure they take the toilet with them.  It’s in the trunk, because you just never know when you’ll have to really go!  A lot of Barbies seem to go missing their heads, which makes me think that they only think they are the only one.  I haven’t found a headless body laying next to a sword yet, but I’m sure it’s only a matter of time.

I can only surmise what happened here… Barbie got the baby all ready to go out, then decide to take one quick naked roll around the house. Was knocked unconscious in a freak naked rollerskating accident…

I can’t really say anything… she is the daughter of a strange person with a rather big imagination.  Stay tuned for more adventures…