As Halloween season draws to a close this year, I think I did alright.  I’m feeling better after my little meltdown!

I did get the costume repaired while The Professor was in school so it lit up once again.  That night we had a special dinner:

Ghostly grilled cheese for the Pre Trick or Treat Supper.

Trick or Treating went pretty well, other than it was cut short by the frequent “pee-er” (That would Iron Man).  We pretty much hit our whole street, and then we were done so he could pee.  That was probably just as well-it was getting chilly.  At least I was getting cold, they were wearing long johns under their outfits. 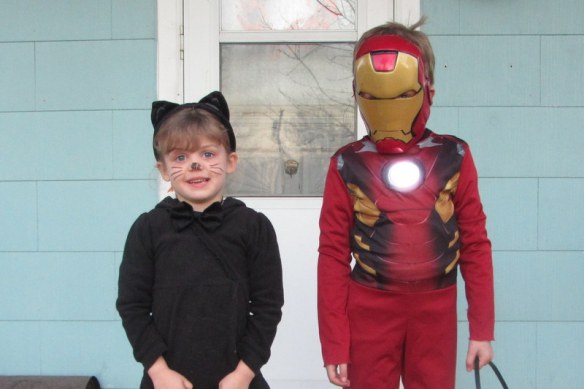 Acting as their characters. They had a lot of fun with this.

Both kids seemed pretty satisfied.  I got my Mom tax for taking them out, two Reeses Peanut Butter Cups.  I can’t complain about that.

Happy Halloween everyone!  Eat a bunch of candy and be merry.

It’s a full few days for the kids.  Tonight marks the first appearance of their costumes-the public library Halloween Party.  That will be interesting, since there are two different parties-I’m hoping the Halloween hating hubby will help me exchange children in between.  Then Tuesday Trick-or-Treating.  Wednesday The Professor has his class Halloween Party. That’s one more time that he’ll get to wear the costume. We’re hoping to go over to the school for the costume parade.  We’ll see if we can make it over there.

The final verdict on the Iron Man costume was to use vellum over the light so that it wasn’t quite so bright, and to sew a pocket into the costume.  The vellum part is done and I will be furiously trying to get the pocket sewn before The Professor’s parent teacher conference this afternoon!  The cat costume is positively adorable.  We used the accessories that we bought at Target, and she’ll wear a black fleece and black pants along with them.  It has been approved by Antisocial Kitty, who has pressed it for weeks by laying on it every day.  How nice of her. 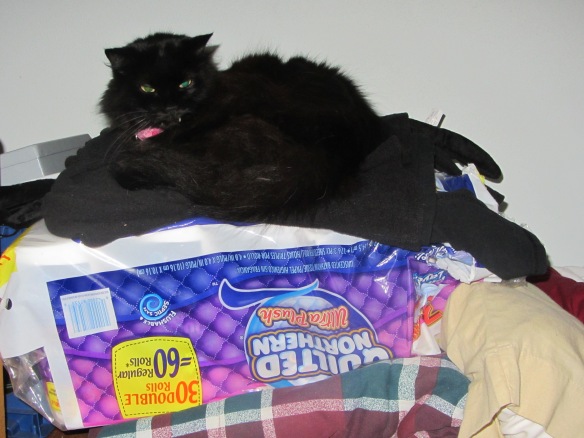 Apparently laying her costume on top of the tp was the right thing to do, according to the cat.

I hope to have pictures taken and posted tomorrow or Wednesday.  However, things don’t always work out like I want them to.

We have made fun decorations using some foam shapes and glitter glue and markers, but really struggled on how to display them.  We finally punched holes in them and hung them in the windows using invisible thread.  Along with our purple lights and cobwebs in one window, and the bat lights in the other, we had a pretty great display!  For Trick or Treating we have a green glow stick for the cauldron on the porch to give off an eerie green glow.  So hey, we may not be giving out treats but our house is going to look really cool!  Again, I’m hoping to get it done and get pictures up sometimes in the next day or two.

I’ve said before how much I love Halloween.  It WAS a big deal when I was a kid.  Not only that, but one of my favorite rides at Disney World was the Haunted Mansion ride.  It was never scary, just really cool.  I always wanted to work at the Haunted Mansion for a summer job. Unfortunately we moved away before I was old enough to do that.  Such a bummer!

My favorite part of the Haunted Mansion, the ballroom.

What do you love about Halloween?  Do you have any great Halloween memories?  I’d love to hear any cool stories!