I’m ready for fall.  I’m ready for leaves changing color, weather cool enough to wear sweatshirts, and being able to put away the tank tops and shorts for a while.  But what I’m really getting antsy for is Fall TV.  Does that mean I need to get a life? 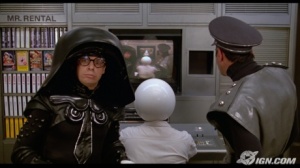 This has nothing to do with fall TV, but when I think of TV I think of this…

We don’t watch a lot of “new” TV in our house that isn’t sports or PBS.  My husband and I have a few shows that we regularly watch.  In his current mostly unconscious state, my husband doesn’t view a lot of TV shows anyway.

Let me state right now that we shun almost all things that are even remotely reality TV. If you want to quit reading my blog forever right this moment, I understand.  A couple of exceptions have occurred to this rule.  We watched “Queer Eye for the Straight Guy” when it was first on, mainly because it reminded me of college (hey I was a music major, you figure it out.)  I watched one season of “America’s Got Talent”, simply for the fact that one of my good friends from school made the finals.  Then I lost interest in it after that.  We also viewed quite a bit of “Iron Chef America” when it was on at dinnertime, but it’s never been something we make it a point to watch regularly.  We have several episodes of “Restaurant Impossible” on our DVR.  Not sure if we’re ever going to watch them, at least not together.

I like comedies.  I really don’t watch anything else, except for a few older few sci-fi shows.  Maybe I’m just too ADD for dramas.  I like to laugh.  And by golly I’m ready for some new episodes of my favorites.  I’ve checked out a couple of the new shows that have already premiered.  I don’t know what to think.  They’re ok, I guess.  I know you can’t really judge a show by its pilot episode, but so far I’m not really sure if I’ll keep watching or not.

My husband’s and my favorite show on TV right now is “The Big Bang Theory”, in case you haven’t figured that out from reading this blog.  We understand a lot of stuff they reference on the show because we’re geeks.  It really adds to it when my husband will pause the show to read the formula written on some board, and he is able to explain it to me (he took Quantum Physics for fun you know).   My other favorite is “Modern Family”, but last season I didn’t enjoy it as much as I had.  I guess it really depended on the episode.  I adore Cam-I had some friends who are just like him.  We both really enjoy “The Middle”, because it’s very much like our family.  My husband is a geek version of Mike Heck, and our son is very much like Brick.  We are middle class people barely making it, much like the people on the show.  It’s mean sometimes but oh it’s FUNNY!

Some shows just have to ruin it for their fans.  We used to love “Bones”.  It is funny and witty and well written.  The characters are great, we are big fans of Hodgins- who else do you know who gets excited about fecal matter?  However, when Emily Deschanel became pregnant in real life they decided to write it into the show, but they went about it all wrong.  They had her get together with her partner.  Nooooo!  There goes all the will they or won’t they fun!  That very rarely works on a show.  We still watch, but it’s just not as enjoyable.

The only show that started last season that we really liked was “Whitney”.  She is one of Evil Genius’s favorite comedians.  The show is like a really warped version of “Friends”.  It’s very different from other shows-I know a lot of people DON’T like it, but I am very happy it’s coming back.  We tried to like “The New Girl”, because we love Zooey.  Some of it is very funny-the Thanksgiving episode was hilarious and we still refer to it.  But we finally came to the conclusion that somebody just decided to turn Zooey loose and let her get as crazy as she wanted.  As much as we wanted to like it, we quit watching it.

“Family Guy” is truly unique.  It really takes a certain type of humor to like that show.  My husband loves it.  I really like it, but there are some things that just plain go too far-which is exactly Seth McFarlane’s intent.  There are some episodes that I love to pieces, and some that are more disturbing than they should be.  We don’t watch it like we watch the other shows, but we do catch it when it’s on.  On that note, I must admit to laughing hysterically at “Robot Chicken”, but that show is so disturbing… yet some of it is sooooo funny.

The one show that I keep forgetting about that is really funny is “Raising Hope”.  I forget it’s on.  I even have the DVR set up to tape it, and I forget to watch it.  Then I’ll have a night with nothing to do and will watch every episode and laugh my butt off.

I have mentioned quite often that we are both geeks, as referenced in Embracing Geekdom.  We both love Sci-Fi, and are big fans of Star Trek.  There isn’t really a show on that is that genre that we watch at the moment.  We have watched “Being Human” (the American version).  Our interest in that show comes and goes.  We really like the characters, we just don’t always like where it’s going.  I’m not a huge fan of the really dark gloom and doom shows that tend to be on.  I watched the new “V” series for quite a while, then it just got depressing.  I wasn’t really surprised they cancelled it.  “Heroes” was good enough to keep my interest for quite awhile, but when Evil Genius got bored of it, I just quit watching.  It was just too dark and depressing.  I like to laugh!  Maybe those dark and gloomy shows tap into my anxieties a bit too much.  I like to look forward to what is going to happen.

I secretly view “Parenthood” each week on nights my husband is gone or in bed.  I get a little irritated at some of the stuff on it, like why does Lauren Graham play the same character in every show she’s in? But I genuinely like it.  The reason I view this alone is this:  if Evil Genius sees I’m going to watch it, he’ll watch it too.  And then he’ll make fun of it, because there might be some warm and human stuff going on.  We can’t have that in our house.  Or he’ll ask 5,000 questions about who is who, what has happened, why that happened, and THEN make fun of it.  No, I don’t go there any more.  I’ll save it for when I can watch it sans mockery.  It’s as close as I get to a soap opera, and I hate soap operas.

Our favorite shows in the whole wide world besides the ones I’ve mentioned are “Friends” and “MASH”.  If there is an episode on, chances are we’ve seen it.  Most episodes of Friends we can recite.  Is that sad?  I don’t think a day has gone by in our house that we don’t quote an episode of that show, unless we are sick.  We own seasons 1-7 of it.  Someday I hope to own them all.

Do you watch much TV?  Good for you if you don’t, you’re more strict than I am.  What shows are you looking forward to this fall?