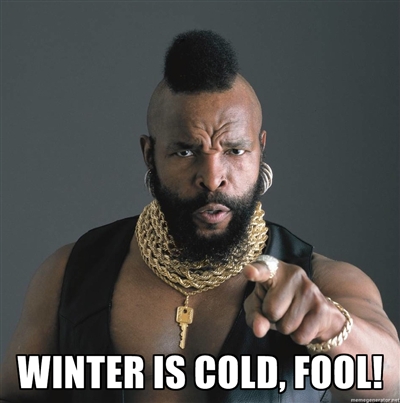 For some reason, Mr T is in my head, saying this…

Winter is cold.  This weekend has been especially cold, or at least feels that way after three days of weather that was nearly 50 degrees.  This, and the fact that Evil Genius has now succumbed to the evil virus/bacterium/alien spores that made me mostly dead, has lent itself well to turning on the oven and BAKING STUFF.  I baked three different things today, AND in addition made a chicken soup that was supposed to kick all invading icky sicky germs to the proverbial curb.

Unless it’s apple crisp, when I bake stuff it’s largely healthy stuff.  We quit eating white carbs for the most part quite some time ago.  Most of the stuff I bake is whole grain goodness.  Today’s baking was all whole grain and largely “real” food.  There were also bananas-my daughter has been driving me bananas begging me to make some muffins from her kids cookbook, so therefore I thought I’d use some of the bananas lurking in the freezer. Her recipe included some different raw nuts.  I never got to Wheatsfield to get the nuts, so I pulled out some similar stuff that used those bananas.

This is really what I should use when I am cooking anything,

The chicken soup was basically a twist on what I usually make, but added ginger and curry powder.  It was good, too bad my husband couldn’t taste it.  I also made homemade whole wheat rolls.  This was a challenge, because I am 1) Too lazy to wait for rolls to rise twice like most recipes and 2)  I do not own a stand mixer.  I don’t think a stand mixer is a vital thing, but like a food processor it would be nice.  I did finally find a recipe that fit the bill after scouring the internets for quite some time.  It turned out pretty well, but they could have been baked a little longer.  I had the temperature going up and down pretty often today due to the fact that I was cooking multiple things that required different temperatures.  It’s a bit tricky to do that when the temperature of your oven is always off anyway.  Mom don’t ask me where my oven thermometer is, I think I mouse carried it off.

I started thinking about the baking I did today, as well as some of the other things I’ve done recently that were healthy things.  Now remember, I don’t profess to be any kind of health or baking expert. 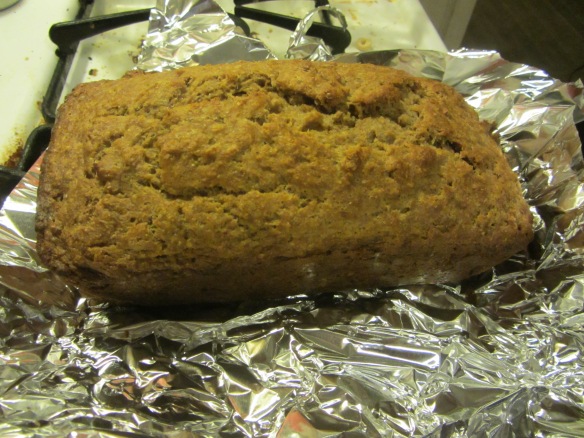 Whole Wheat Banana Bread-One of many on my list to try from 100 Days of Real Food.  It was also my first time using coconut oil and honey in a baking recipe.  I’d been making the bread from the classic Better Homes and Gardens New Cookbook but had been subbing whole wheat flour in for part of the white flour.  I just think it tastes better.  This was very good!  I will use this recipe next time.  Note to self-buy lots of honey! 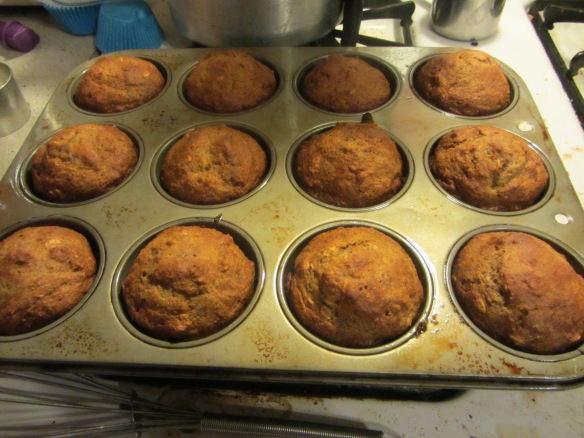 Whole Wheat Banana Muffins-Only trying them will tell if these actually turned out. Considering I put baking soda instead of baking powder in the mix it could have been a complete disaster (I was advised to put in  half the amount of baking powder and that worked just fine). Also, apparently if you add coconut oil to cold ingredients it solidifies.  By the time this happened I had already made banana bread and the dough for the rolls was on the counter rising.  I just said screw it and decided to finish it anyway.  I haven’t personally tried one, but they must be edible because my son gobbled one up in about ten seconds this morning. 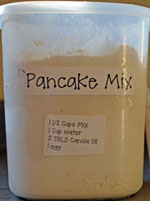 I have my mix in something very similar. I need to print out the label with the instructions.

Whole Wheat Pancakes-This is one of many great recipes from the Super Healthy Kids website.  This is a mix you can make and put in your pantry until you are ready to have some pancakes.  Then mix up and make em!  It makes great pancakes!  I tend to overcook pancakes, but I was really careful with these and they turned out great!  The kids ask for them a lot.  Too bad their mother is lazy in the mornings.

Crockpot Steel Cut Oatmeal-I’ve been wanting to try steel cut oats.  I love oatmeal, but instant oatmeal isn’t the greatest for you, unlike the uninstant kind.  So I made this from a recipe I found.  I also have made it on the stovetop, but I wasn’t paying attention and it boiled over-I think the crockpot is more my speed.  It’s great having the oatmeal waiting for you the first morning, and then having it to heat up from the fridge the next few mornings.  This recipe is fabulous, the apple chunks and cinnamon make it almost irresistible.  You really can’t taste the brown sugar in it, so I added a little after heating it up in the mornings.  The second time I made it, I subbed agave nectar for the brown sugar.  Yum!

Whole Chicken in a Crockpot-This was AWESOME!  We put the chicken in the crockpot right after lunch and left to go shopping.  We got back about 6 hours later, and supper was ready!  It cooked up perfectly.  I was a little weirded out about the fact that you don’t put any liquid in it, but Lisa Leake has been right about everything else we’ve tried.  There is also a recipe to make stock right in the crockpot, but I got lazy and didn’t do it.  I am definitely going to try it, since I usually boil everything on the stove that night and am up until all hours picking the remaining meat off the bones and making stock.  This would be great to make the next day.

Whole Wheat Biscuits-I used to buy the Pillsbury Wheat biscuits in the tube.  I hate the tubes.  Not only are they not very good for you, it can get pricey if they aren’t on sale.  AND I don’t like to open them.  I hate it when they pop.  I would rather throw it across the room to open it than pop it open.  Or give it to my kids or husband.  Anyhoo, these look puzzling when you make them. I put them in there thinking there was no way they were going to turn out right.  But they did.  They were so good that the one who doesn’t really like bread products ate two of them.  They are 100% whole wheat, but are made with the white whole wheat flour.

Whole Wheat Pizza Rolls-There is a story behind these.  Recently we had a little extra money leftover after an outing.  I wanted Health is Wealth brand Whole Wheat soy cheese pizza rolls.  I had to go all over kingdom come to get them.  However, when I finally did find some (three store later)  they were outrageously expensive for such a little box.  But I was desperate, so I snatched them up in my hot little hands and took them out to the car.  After I cooked them I realized that if the date on them was the expiration date instead of the packing date they would be bad.  After reading up on it a little too much on the internet I threw caution to the wind and ate them.  I didn’t die, so that was a good sign.  They were pretty good, though not as good as I had remembered them. I really wanted to make my own and see if I could somehow recreate them.

And that’s what we tried to do.  It sure didn’t go well.  However, the picky eater loved them, so I will have to try it again.  He literally ate almost all of them, which is amazing to me. The insides were really good, but they were doughy because the dough was too thick.  It didn’t help that I didn’t actually find a whole recipe.  I found a recipe for thin crust pizza dough and another recipe for filling.  Evil Genius insisted on making them with the ravioli maker.  Yeah, we have one of those.  He HAD to have one. We’ve used it once in the couple of years that we’ve had it.

Coming up I’m trying Buckwheat waffles and some veggie muffins that the Princess has been bugging me about.  I’ll keep ya posted.  What healthy recipes have you tried lately?  Has anything turned out better or worse than you intended?  I have to go, I have a sick genius to take care of.

Here’s to hoping you haven’t felt mostly dead all day.