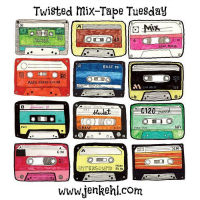 Demetri Martin on exercise:  I go the gym and I try to run on the treadmill and I listen to music but it doesn’t motivate me enough. So I’m going to get a recording of a pack of wolves gaining on me. People would be like, ‘Why is that guy crying on that treadmill over there?’ ‘I don’t know, but he’s been yelling, ‘help’ for like 20 minutes. He’s getting a good workout.’

In case the previous quote didn’t cue you in, this week’s theme is a mix to get motivated to do, well, anything.

Trust me, I need all the motivation I can get these days, especially in the exercise area.  While I haven’t gained any weight according to the scale, I am certainly gaining what is known as the middle age spread.  I am not planning on subsisting on ten calories a day or eating nothing but cabbage for six months, so instead I am simply trying to spend more time at the gym.  I already lift, but I hate cardio.  My schedule doesn’t allow me to attend fitness classes like I used to, so I’m just trying to walk whenever I can.

So here is a sampling of the songs on my Iphone that motivate me to get moving.  And I behaved myself this week and stayed as close to five as possible.  Are they working?  Ummmm… sort of.

Did I mention I saw these guys LIVE in CONCERT?  What?  I did?  A few too many times?

Fun to sing, especially in the shower.

I really don’t think I need buns of steel. I’d be happier with buns of cinnamon.-Ellen Degeneres

The video to this song is probably going to cause me to lose my “family-friendly” rating here.  So do me a favor, if you watch it a)  Don’t be offended-because trust me, this particular group has made waaaay more offensive stuff than this.  b)  DO NOT watch it with children in the room, unless you want to field some uncomfortable questions.  “Mommy, why is that guy’s crotch like a light bulb?”

Now, forget all of that and please listen to this very motivating song.

I’m not a huge Britney Spears fan, but good lord that girl sings some catchy stuff that makes you want to move!

Til The World Ends-Britney Spears

I should work out. It’s hard to find time to work out when you really don’t want to.-Jim Gaffigan

DJ Got Us Falling In Love Again-Usher

Would You Go With Me?-Josh Turner

What songs motivate you to do stuff?  Check out the links over at My Skewed View to see what gets other people motivated!

You’re probably wondering what King Julian from Madagascar is doing on my blog.  You see, he’s been in my head lately.  He’s the voice of my conscience, sort of.  He’s inside my head saying with that voice, “You have the flabby flab.”

I think I’ve mentioned the fact that I’m jealous of my husband’s gym membership.  He slacked off for awhile, but now Evil Genius has recently joined the ranks of those returning to the gym.  He has been a gym maniac, going every chance he could.  I haven’t jumped on this bandwagon because that particular gym that he gets the free membership through work is an hour away.  A bit of a drive to get back in shape, don’t you think?

I wanted to insert a reference to Flashdance here, but when typing it in I found this scene from Scrubs.  I don’t remember this one…HA HA!

After listening to him talk about how he was sore from his workouts, I decided to take some action.  It’s not that I want to be in pain, I’m just wanting to start getting back in shape.  We’re in a better financial situation than we have been, so I thought I would call the gym that I used to belong to and speak to them about waiving the hefty “orientation fee” so I could start working out again.  As it turned out, I didn’t need to.  One of the perks of where I am subbing is that I can get a discounted membership taken directly out of my check.  This gym happens to be just a few blocks from where I work.

I went in to work out on Saturday because I was in town by myself doing grocery shopping anyway, and it was GLORIOUS!  I was almost intoxicated from the excitement.  I did an upper an lower body workout using all of the weight machines, and also used the elliptical and the treadmill.  The treadmills and ellipticals have tvs with every channel known to man.  If I hadn’t started feeling guilty about leaving my children with Evil Genius for a better part of the day I would probably still be there.  They are open 24 hours, you know.

Here’s the thing that gets me.  How come I can’t bring myself to work out when I’m at home?  I have free weights. I have a mat. I have workout DVDs including all of the Jillian Michaels videos (I’m still afraid she’ll eat me). I even have a treadmill (without incline, but you can at least change the speed).  What is keeping me from exercising whenever the heck I want?  Well for one, there are no children or dogs or cats to fight with at the gym.  Even when the weather is nice, if I am home by myself, I have to fight with the four year old.  Her mood totally dictates if I will walk and how long I will walk if so.  I could walk at night or early in the morning, though.  How come I am so lazy about walking when the weather gets cold?  I have thermals, I have things I can layer, there is really  no excuse!  After all, there is nothing sexier than me getting all dolled up in my Han Solo planet Hoth winter coat.

I don’t actually own a Taun Taun.

I felt so great about working out, but mad at myself for letting it go for so long.  While I have accepted the fact that I will never be a size four again, I haven’t wanted to look at myself in the full length mirror in quite some time.  While I’m not overweight, the best word I can think to describe myself these days is “squishy”.  Now I wouldn’t trade my kids in for a perfect body, but wouldn’t it be nice if I could get back to being comfortable in the one I have?

I don’t eat as well as I should.  I don’t work out as often as I should (until now).  I don’t get off the couch as much as I should and not necessarily from lack of motivation. It’s more from I’m blogging and networking and I JUST CAN’T STOP!  Working for a whole month now has already caused me to shrink a little, and I am comfortably back in my size 8 boot-cut jeans.  Now there is still quite a bit of coffee cake top spilling over, but perhaps this new found motivation will cause that to not spill as much.

So this is the start of a new work week.  Unfortunately I have to miss the gym today.  I have to go run errands on my break and won’t have time.  Since I have to leave promptly at five to be sure to pick up my son by 5:30 in a town almost a half hour away, doing it after work is kind of out of the question.  Normally I’d say these things can wait anyway, but the light bulb burned out in our shower.  We have to shower by lantern until we replace the bulb, and of course it is a “special” bulb.  Showering with light is a bit important, especially if you are shaving your legs.  So instead of pumping iron, I’ll be going to Lowe’s.

Barring any other major weather/running out of something/special bulbs burning out then I swear I’ll be hitting the gym the rest of the week, and looking forward to it!

e Hans and Franz would be so disappointed in me for letting myself go like this.

Oh yes, don’t forget to vote for me on “Top Mommy Blogs”.  As far as I know, you just click the icon in the sidebar and that’s all you have to do.  Considering I can’t remember to say anything about it, I’m sure I have a whole four votes.  It’s ok, I’m doing it more out of feeling badly for getting registered and then not doing anything with it than actually caring about how many votes I get!